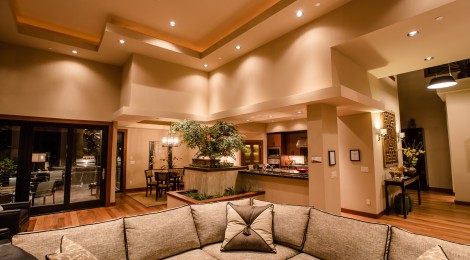 Rick Bernard of Bernard Custom Homes was featured in The Oregonian on July 28, 2012 in “Rick Bernard builds record 20th Street of Dreams home.”

Rick Bernard’s first Street of Dreams home in 1980 featured a wood-burning stove in an arched brick hearth. The stove was so efficient you could heat the whole house with it.

“We thought it was state of the art,” he said.

His home in this year’s show has a $10,000 gas fireplace imported from Israel. When it arrived, he had to remodel the wall it went into, removing wood studs and replacing them with steel.

“The Street of Dreams pushes me out of my comfort zone,” said Bernard, 63. “It’s one of the reasons I keep doing it.”

The article goes on to discuss Bernard’s career as a custom home builder, highlighting his experiences with the Street of Dreams, and describes the new home.

This year’s model is a sleek, contemporary home with an Asian feel. Bernard says it’s influenced by his love of Frank Lloyd Wright’s work, although he said he’s never built anything quite like this. His longtime associates, home designer Mike Barclay and interior designer Susan Green, were instrumental in creating something he said is cool and subliminal — and maybe a little hard to explain.

“We want to extend the feeling of grace. We don’t want to shove it in people’s faces like a cream pie,” he said.

← Do I Need an Independent Warranty Beyond the All-Inclusive Builder’s One Year Warranty?
20-20 2012 Street of Dreams Custom Home →