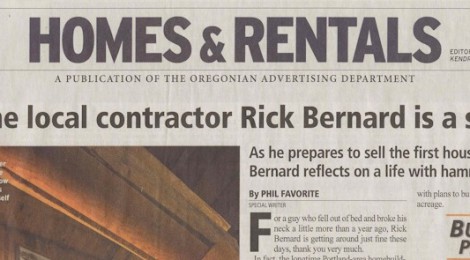 In the News: Oregonian – Longtime Local Contractor Rick Bernard is a Survivor 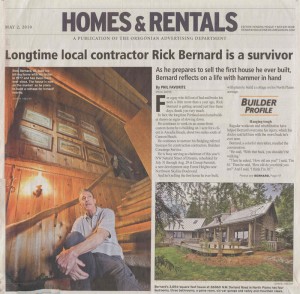 In the May 2, 2010, issue of the Oregonian’s Homes and Rentals section, Phil Favorite interviewed Rick Bernard of Bernard Custom Homes about his life as a custom home builder in the Portland area, and his many years association with the Portland Street of Dreams. The article also covered his back injury in 2009 when he fell out of bed and broke his neck, and his recovery.

The following are excerpts from the article, “Longtime Local Contractor Rick Bernard is a Survivor.”

As he prepares to sell the first house he ever built, Bernard reflects on a life with hammer in hand…the longtime Portland-area homebuilder shows no signs of slowing down. He continues to work on an ocean-front custom home he is building on 1 acre for a client in Arcadia Beach, about two miles south of Cannon Beach. He continues to nurture his fledgling referral business for construction contractors, Builders Concierge Service. He is busy serving as chairman of this year’s NW Natural Street of Dreams, scheduled for July 31 through Aug. 29 at Cresap Summit, a new development atop Forest Heights near Northwest Skyline Boulevard. And he’s selling the first home he ever built, with plans to build a cottage on his North Plains acreage.

…Spend a little time with Bernard and his youthful passion for life is evident. He can barely sit still, despite the ailing back. He collects cars and greatly enjoys driving them — fast.
Despite having built several large, high-profile luxury homes, including 19 in the Street of Dreams over the years, Bernard remains surprisingly fond of the smaller and more remote properties of his first few years in the business.

He still lives in the first home he ever built, a kit log home he constructed with the help of his late father that was completed in 1977. The house sits on 10 wooded acres in North Plains that have served as the spiritual center of Bernard’s life since he found the property after an intense, year long search.

When he began that process, he had no idea he was opening the door to a homebuilding career that has spanned 35 years. 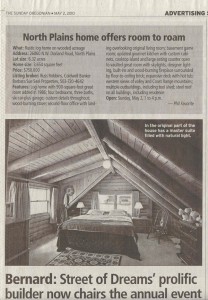 “I thought I was going to be a landscape architect,” Bernard said, recalling his first few years after leaving the University of Oregon in 1976. “I did reasonably well in school and I got some good offers from offices in California, especially San Francisco and Los Angeles. “But when I thought about it, I really didn’t want to go down there.”

Bernard’s been following his heart’s calling ever since. Fresh out of college, he said he wanted to live in a rural area but found listings on acreage scarce and mostly unacceptable. He said he soon realized that if he was going to find the place he wanted, he’d probably have to build the house himself.

“I didn’t have any money, but that didn’t stop me,” he said. Friends of Bernard know that when he gets an idea in his head, he’s probably going to chase it and see where it leads.

He spent a long, slow year building the North Plains log home, learning everything he could from subcontractors hired to help complete the mission. By the time he was ready to put a 900-square-foot great room addition on the home, he was 10 years into a career as a conventional homebuilder.

← Q & A What is Up With the New Masonry Materials?
Q & A – Have Computers Really Improved the Home Experience? →