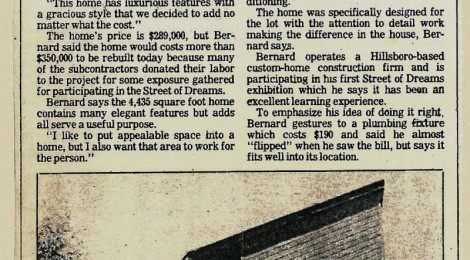 In the News: Nothing Held Back in Bernard’s Excelsior 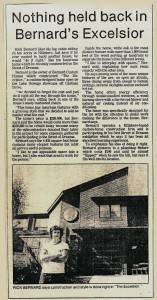 The following are excerpts from the article.

Rick Bernard likes his log cabin sitting on ten acres in Hillsboro, but says if he ever wanted to build another house, he would “do it right,” like the luxurious home which he recently constructed on the Street of Dreams.

Bernard is the owner of Bernard Custom Homes which constructed “The Excelsior,” a custom-designed home open on the Lake Oswego showcase off Carman Drive.

“We decided to forget the cost and just do it right all the way through the home,” Bernard says, sitting back in one of the house’s many cushioned chairs. “This home has luxurious features with a gracious style that we decided to add no matter what the cost.”

…Bernard says the 4,435 square foot home contains many elegant features but adds all serve a useful purpose. “I like to put appealable space into a home, but I also want that area to work for the person.”

Inside the home, white oak is the most distinct feature with more than 1,800 lineal feet of wood serving as handrails to separate the home’s five different levels.

“I like to interplay with spaces,” Bernard said, explaining how each room connects with the other area. He says among some of the more unique features of the custom home are: an open air atrium, three dining areas from casual to formal settings, several skylights, and an enclosed hot tub.

The home offers energy efficiency through double-insulated windows, a wood burning stove with a fan-forced blower and natural air cooling instead of air conditioning. The home was specifically designed for the lot with the attention to detail work making the difference in the house, Bernard says.