In the News: Daily Journal of Commerce – Builder Bets on Flamboyant Home 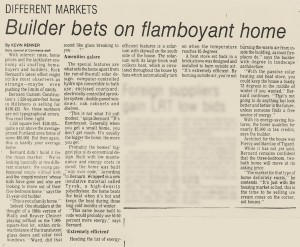 Rick Bernard’s most recent custom home was featured in the Daily Journal of Commerce in the “Different Markets” column by Kevin Renner. The article was titled “Builder bets on flamboyant home.”

Highlights in the article include:

With interest rates, home prices and the lackluster economy all snuffing home-buyers and builders, Rick Bernard’s latest effort might strike most observers as strange—maybe even pushing the limits of sanity.

Bernard Custom Construction’s 1.550-square-foot home in Hillsboro is selling for $136,425. No, those numbers are not typographical errors You read them right.

Bernard didn’t build it for the mass market “We’re looking basically at two different markets. The young professional couple without kids and the the emptynesters’ whose kids have gone and who are looking to move out of their five-bedroom home,” says the 31 year-old builder.

“This is not a family home.”

…Probably the home biggest plus is its economical design. Built with low maintenance and energy costs in mind, the home was built “way over code,” according to Bernard. Wrapped in a new insulative material called Tyvek, a high-density polyethylene, the home beats the heat when it’s hot and keeps the heat during those long cold months of winter.

…Heading the list of energy efficient features is a solarium with skywall on the south side of the house. The solarium with its large brick wall collects heat, which is circulated throughout the house by fans which automatically turn on when the temperature reaches 85 degrees.

A heat stove set back in a brick alcove was designed and installed to burn outside air. “It’s extremely efficient. By burning outside air, you’re not burning the warm air from inside the building, as most fireplaces do.” says the builder with a degree in landscape architecture.

“With the passive solar heating and heat stove, you could keep the house a toasty 72 degrees in the middle of winter if you wanted,” Bernard continues. “That’s not going to do anything but look better and better in the future, unless someone finds a free source of energy.”

With its energy saving features, the home qualifies for nearly $5,000 in tax credits, says the builder.

Architect for the house was Piercy and Barclay of Tigard.

← Constellation X 1990 Street of Dreams Custom Home
What Type of Siding is Best ? →